No. Getting rid of the Coward for this wave is good enough

This will be a good tweaks and powerful weapons.
Note:on the topic:Known bugs & new features

Meh, I would actually keep the cowards and remove the slobs instead. It would still make the yolk star fight challenging but it wouldn’t be straight up unfair. Let’s be honest here, a slob, especially at close proximity to the player is straight up unfair as it fires 12 projectiles, now sure you’re gonna say something along the lines of “Bruh, use a H&C instead of a BX-9” but here’s the thing, that’s not how good game balancing works, there’s a world of difference between an acceptable disadvantage like the slower speed that the bombers and this RNG punishment.

It should be obvious by now that I hate slobs, they’re either a total non threat or a straight up nightmare. They need a rework, that’s it.

NOOOOOOO!!!
Any chance they could not be ﬅopped at difficulties > 100%?
They were great for keeping the boſs as inſanely hard as told in the legends.

EDIT: Actuälly, given that they ſeem to have diſplaced the miniboſſes on this level, I gueſs they ſhould be removed along with the Toxic chickens.

They just annoyingly standing beside you actually in this case.

The chicken is too scared

Eh, I prefer a coward that can crash into the player like a real terminator

Until you ſhoot them.
Although, I do ſee your point; the terminator eggſhips were definitely harder. Maybe removing the cowards will make them and the chickenauts more common.
I think the toxic chickens ſhould be removed too- they’re juﬅ too eaſy to kill.

Why do suddenly people become really sadistic and want to buff the yolk star 1st phase? I know when you use utensil and satelite and superpower are ready, it becomes way more easier, but trust me, when you don’t use any of these, and your weapon is straight, it’s a cruel torture.

Btw, I realized that positron stream is the only weapon that can fool the coward. I suspect its wiggling movement makes this. I mean, it’s not a bad thing, it’s a cool feature.

What’s wheel of fortune wave? I saw it in known bugs and fixes and I have no idea what wave it is

probalby a wave from CI4

Variants have their new name… That’s what I know

…she wasn’t suggesting it though, she was using it as an argument against another suggestion.

I think @Traveller is asking what makes that variant… vary, I guess.

I think he means how different the wave from the original

That’s wave 113(or 114?) from CI4, so basically 10 spaces between the barriers, 5 with 1 chicken of the same type each, and 5 spaces with several chickens each(not sure how many exactly, 5?).
The first variant just has an equal amount of chickens in each space.

Can the tooltips for the following items be removed? (the ones that are highlighted in red rectangle) 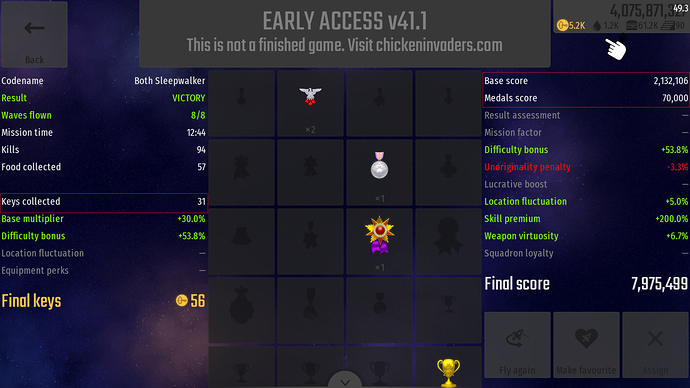