I started playing Chicken Invaders Universe yesterday and here are my first impressions.

1. Interface
While i do like the current interface, i think that the previous interface fits Chicken Invaders better.

2. Gameplay
The game seems to be working quite well. It is fun to play, but sometimes, some waves are a little bit too hard in my opinion. For example, one of the waves was full of these: 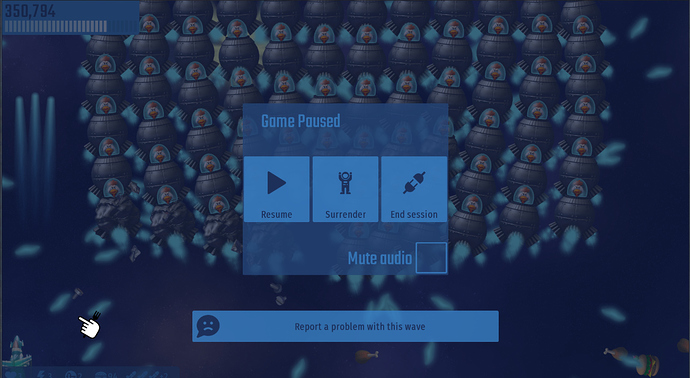 unknown.jpg1302×715 254 KB
They were literally everywhere. I don’t remember the mission codenames though, but that’s not the
first mission that i played that had a lot of them. Other than that, the game is pretty nice.
(unfortunately the server started being under maintenance when i defeated a boss, and i was stuck
on a blackscreen, i think all my progress is gone?).

3. Music
The music is pretty nice.

4. Customization
Personally, i think that having to pay just to change the color of your ship is not that great idea.
I do like the fact that you can upgrade your ship though.
Also, maybe let the players set their name when they first open up the game?

5. Opinion
So overall, Chicken Invaders Universe is going in a really good direction. All these changes make the game completely fresh. What else can i say? Good luck!

They made hardest a bit impossible. I wish they can fix it.

Well, using the rockets is a workaround, but what if you don’t have them?

Honestly, it costs more than your gains… So dont play in that difficulty.

Also server is crashed either…

Let it be haard, don’t nerf it! This game needs some challenge, previous episodes were made for kids it seems compared to this

Sure but, the previous waves were really easy, and then one of these harder waves came out of nowhere. I don’t think it should be like that. The easy waves shouldn’t be next to the harder ones.

When i see three ring circus level with the UFO chickens shooting eggs along with the chickenauts atacks was awesome. I even got laugh at the time.

Tell me about it! Those enemies, topped off with the Chickenauts, are PURE MADNESS.

Once I got a wave filled with those big chickens in astronaut suits, they nuked my lives, but I liked it, it was fun

Chickenouts are fun. But I hate these metal egg armor chickens

I met the Henterprise (final boss from CI5) in the weekly challenge, it was disappointingly too easy. Although I completed this week’s challenge with 4 lives lost and 1 life remaining, no satellites, no missiles.

Theres easy ones and hard ones. Like at Killing Floor 2. Weekly challenges is for everyone. IA is working for fix the problems. Than they will star to balance difficulty etc.

The mother hen ship is stronger than all for now…

wow i need to play this level