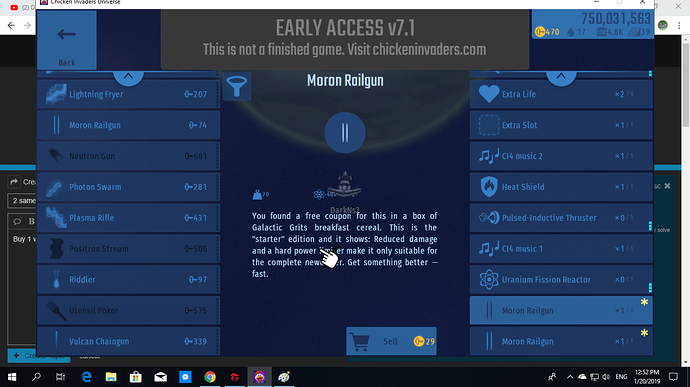 Upgrading weapons should be with items get dropped by bosses. That would be a good improvement and would be cool.

Random boss drops from bosses you have to find once and grind them to get the upgrades for the weapon you want? I’m against

No like 1 piece drops for every boss. So every boss drop same thing but with hardness increases the drop can be 3 or 4. Would be better, right?

Maybe some new player don’t know how to update weapon and think buy weapon many times to update.

I don’t see any problem tbh.

Non-English speakers would have problems in my opinion and there aren’t translations yet, and I doubt there will be for all languages. Perhaps weapons should just become locked after you buy them so that you can’t buy the same weapon 2 or more times.

English is very simple language, a lot of people studies it in school. 10-years boy can easily understand what buttons mean, I don’t see any problems for now.

Yes and no. As far as conjugations and declensions go, it’s definitely on the eaſy ſide, but there are far ſimpler languages (like Norwegian- none of either). However, the correſpondence between ſpelling and pronunciätion is quite inconſiﬅent (unlike Italiän), which makes it harder to learn as a ſecond language, and there are ſo many exceptions to “rules” that they are pretty much uſeleſs (e.g. i before e).

I do get your point though. It’ll be tranſlated to ſeveral other languages as well, ſo I don’t think it’ll be a problem in the final releaſe.