This chicken loves corn, so you can expect him to toss a corn on the cob or two. He would wear a straw hat and would wear blue overalls.

He also could try to stab you with a pitchfork if you got too close. He’s also an egg farmer, though for some reason he farms his own eggs. So expect him to toss a few eggs as well.

So, something like the Special Forces reskin in the halloween edition of CI5? It’s similar to what you described 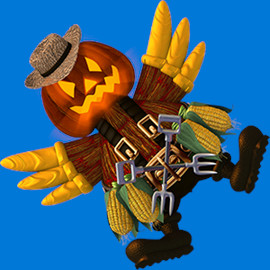 Yeah. He wouldn’t have a pumpkin on his face though. And I would imagine his corn wouldn’t blow up. He might consider tossing pitchforks though.