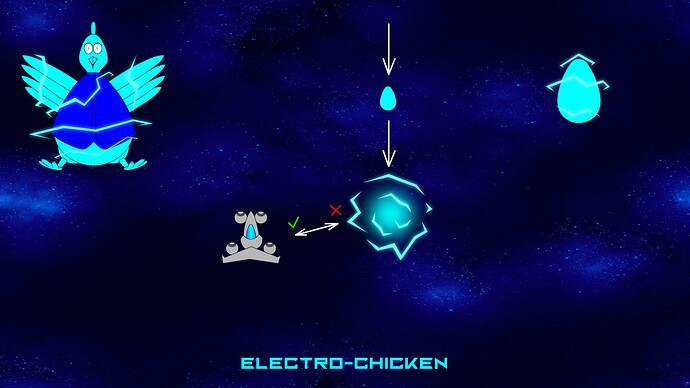 electro-chicken1920×1080 99.3 KB
I have an idea, add a new chicken enemy - electro-chicken.
Electro-chicken - he appears in every wave with a lightning mission, he looks like a blue chicken (actually he is electric) with blue vests, with electric sparks, white eyes with blue pupils. Shoots a blue (electric) egg normally down or towards the player, if the electric egg comes within the distance of the player, the egg will explode and generate a smoke ball lightning, just like the smoke chicken, when the player kills the smoke chicken, flue gas will be generated, or if the player is in far away from the egg, the egg will fall down and become an omelette. Also, if the player kills the electro-chicken, it will also will explode and generate smoke balls lightning. If the player gets close to the smokeball, the player will explode. You have to wait a few seconds for the smoke ball lightning to disappear.
11 Likes
Starbrockle December 8, 2022, 6:31pm #2

Coward chickens are shocked to read your idea.

man this topic must be dead

then leave it be