A set of wave ideas created by matix524 and Piotrek1113

With the version 110 inbound, a bunch of brand new (and some returning ones!) are going to be implemented, @Piotrek1113 and I decided to hop onto the idea train and revamp some wave ideas that we had in our heads for a long while.

Yes, we realise that everyone is doing the same thing now, but hey! It’s beneficial to the game…to some extent!

The reason as why both of us are doing this topic, It’s because we’re creating a polish translation for this game together and creating both separate topics is rather pointless. So we decided to write our ideas here.

Obviously, we should point out that the assets that we used to create concepts of each specific waves were taken from previous installments of the game and I’m that kind of guy who always must give credit to the original creator of things! So all assets here were created by our beloved Interaction Studios!

I don’t want to go too insane here, so I’ll try to keep things brief and simple.
I’m not the best when it comes to naming things, but I think each wave title is depicted correctly but the name can be changed, I got no problems here!
I’m also absolutely fine with some alternations and small changes to each wave (different enemies, layout etc.)
Everything here is an idea, so we don’t take everything for granted!

Keeping your garden flora ripe and feasty is very much important! But what if the reality is different and you started to grow feathers in your yard? Not the greatest moment to experience, bird flu is yucky.
In my opinion, waves with bubbles are quite controversial, they tend to slow down the pace a little but it provides the player with some entertainment. 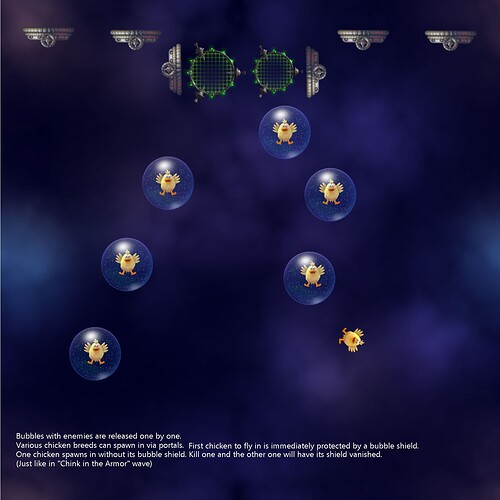 One of the few waves where we wanted to add bubbles. Bubbles are meant to simulate water (hence the wave name). Everything is described in the image, take a look!
(yes i know there is a white line on the left, i was just lazy to fix it :p)

I like waves that are dedicated to a specific chicken breed. The fat one deserves some attention for sure!
(it’s already popular.) 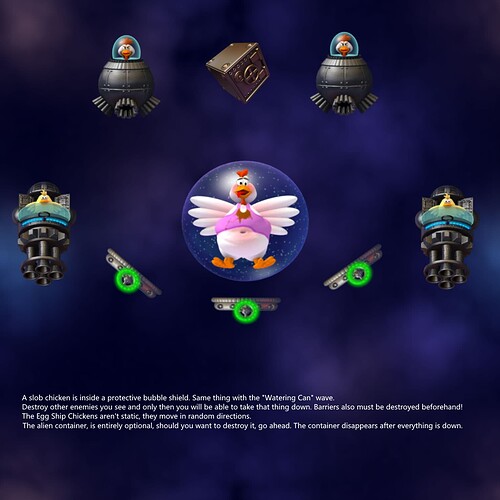 Ever fried a chicken breast on a pan? With right condiments, it tastes delicious!
Sadly, you can’t fry a chicken in the middle of outer space (or I should say, Universe), so you will be provided with this alternative! 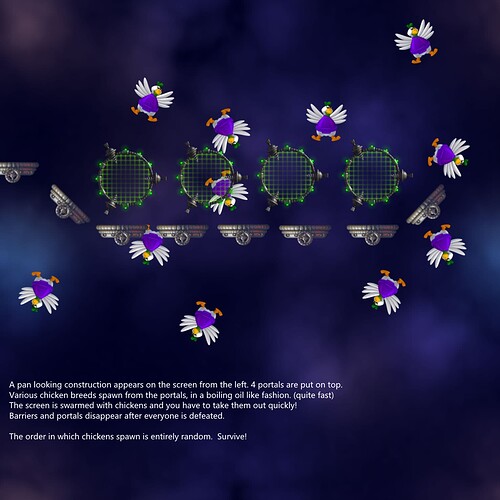 Writing things can be both fun and daunting. But have you ever read a chicken poem? No? Then surely you never saw this crazy wave either! 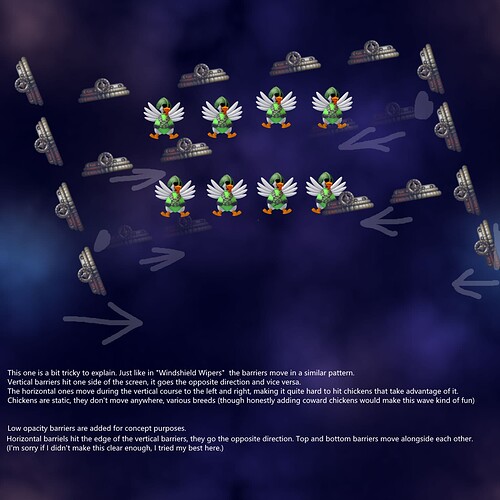 (This one was quite tough to make. But I hope it’s clear enough to understand!)

Solitaire is one of the most popular card games. Did you ever try the Windows version of it? You might remember that funky effect after you finish the set, where cards multiply and fall down to the bottom and bounce afterwards.
Cool stuff! 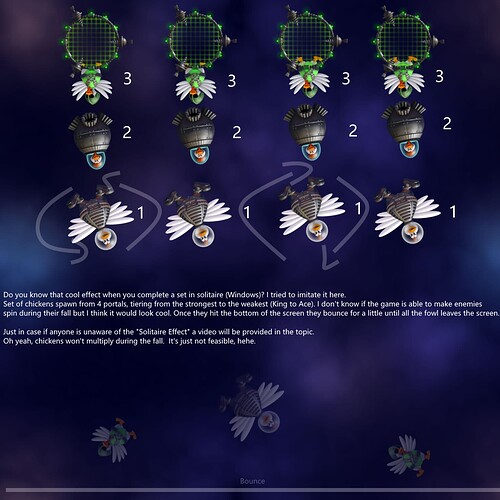 And these are Piotrek’s two cents (literally)

#6 GASHAPON MACHINE (@Piotrek1113)
Just a typical gashapon machine, with bubbles instead of plastic balls. Bubbles will slowly fall down through the barrier (which also rotates), after bubble leaves the machine it releases the enemy.

#7 CHICKEN RACING CARS (@Piotrek1113)
Maaaaybe inspired by Mario Kart. In this wave chickens are racing in space, warping from side to side imitating a lap. Lower cars driving normal, where the upper ones are a bit faster. When the driver gets destroyed, the car also vanishes (unless you took care of the barriers first).

And… that’s it. We had lots of fun creating these concepts and we are looking forward to hearing your opinion! If there’s any questions, ask them down below!