Chicken Downpour
A wave with the general danger zone as the entire middle section of the screen. On top of a random assortment of chickens on the side areas, there will be a horde of quickly moving chickens, scaling with difficulty, that bursts from the top of the screen straight down to the bottom, and then teleporting back to the top to repeat the process through two off-screen black holes. Beating the wave requires timing to get shots in before the chickens fly into you.

Harder variant of CD: Chicken Waterfall
This tougher variant found in higher difficulties also features 2 additional streams of chickens flowing straight down at the left and right edges of the screen. There are still safe spots between the streams, however.

A different variant of Spiral of Doom: Danger Spiral
This time, you’re the one spiraling toward the center. With a safe zone being marked on one of the bottom corners, invincible barriers will fly from the opposite end to generate a set of walls that forces you to travel along the made spiral path, with chickens getting in the way such that anomalies in the wave must be used to shoot down. You’ll have to reach the center to get rid of them all, which always includes a Chick Gatling Gun to bother you throughout your navigation of the spiral.

A Vault Hoard?
A whole group of Alien Containers appear, but all but one are fake, unleashing a horde of stronger than average chickens with no specific movement patterns to deal with. Replaces the normal free Satellite waves in harder difficulties.

Chicken Migration
In this wave, chickens will appear in V-formations, and linger around at the top when they fully appear. After a few seconds, the formations of chickens will hurry on straight downward, and can quickly crash into the player if they are caught off-guard. If a formation leaves the screen, they despawn. The wave ends after all formations spawn and flee/are destroyed.

Undercover Agent
One of the most dangerous jobs of the UHF is to go undercover as an undercover egg ship, infiltrating the territory to look upon their dangerous secrets that they always hide from potential enemies. However, most undercover agents, for the high results they can make, are at high risk of being shot down by their own teammates trying to shoot the chickens. Their ships have armor to deal with this common outcome, but are grateful to be spared by a more caring player.
This wave includes 2 sub-waves with large generic formations of chickens, and an Undercover Egg Ship (resembles the white egg ships in CI3 but slightly modified). The main goal is to kill the chickens without destroying the Undercover Egg Ship. While saving the undercover agent is optional, if you clear the wave with the UES still alive, the grateful UES will hand you a bunch of Keys as a form of gratitude. There’s no penalty to shooting down your local undercover comrade, however. If you save a UES, you can get an unique medal on the end screen if you’ve completed a wave with an UES in it. Thankfully, the HP of an Undercover Egg Ship scales with difficulty.

Harder variant of UA: Double Agents
This wave would feature 3 sub-waves and 2 Undercover Agents flying around that you have to be careful with.

Electric Planet exclusive: Lightning Bolt
Features two fast moving streams of horizontally flying chickens moving in a zig-zag fashion back and forth, one on the top section and one in the middle section. Also features some barriers at the very top that shoot energy projectiles at you like the ones in Shoot the Core.

Hot Planet exclusive: Flame Spouts
Three small danger zones are marked at the bottom of the screen, one in the center and the others at the two lower corners. Out of those three columns, a scrambled group of chickens will pop upwards and hang around at the top for a few seconds before dropping down past the bottom of the screen to repeat the process. Sort of like Three Stroke Engine but there are no barriers, and the chickens have no real arrangement, they just pop up in a loose cluster together in their respective column.

Electric OR Hot Planet exclusive: Atomic Rush
The screen expands as a cluster of strong chickens surrounded by tough barriers arrives in the center, and then three rings of weaker chickens appear orbiting the center forming rings as if to simulate the movements of the energy orbs in the Atomic Firepower item.

IA juﬅ ſaid that it’ll be a while before he ﬅarts looking at new ideas again, ſo be ſure to remind us all about this then.

Dunno what in particular needs explaining.

Also, I just added a few new wave ideas to the original post, including waves that would be exclusive to the Hot and Electric planets.

How this got opened again? 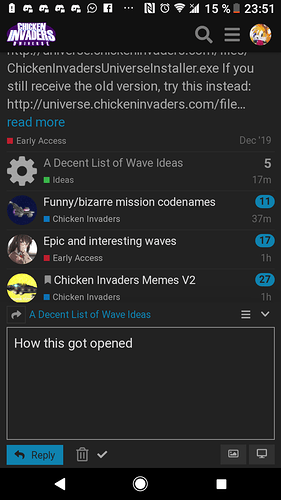 How this got opened again?

I like the designs for Chicken Downpour/Waterfall Undercover Agent, Flame Spouts and Atomic Rush. It would be amazing if you could have shown off some pics, as well