Wrong name of a wave

There is a wave called ¨Chink in the armor¨, While the original name is ¨Chick in the armor¨.
The wave is a bunch of chickens in bubbles and one is discovered. you kill it, another discovered appears

Wiki says otherwise… I think you just read it wrong, I also thought it was “chick” at first. 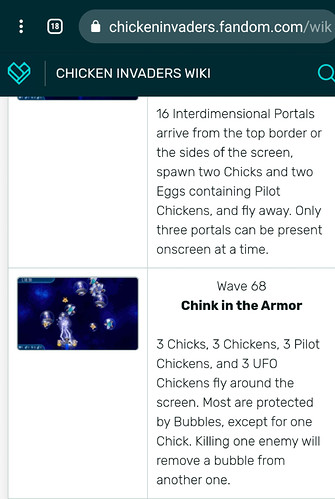 Edit: and looking at the definition of the word “chink” (“a narrow opening or crack, typically one that admits light”) it makes sense why it’s “chink” and not “chick”

Pages for logged out editors learn more The idiom "chink in one's armor" refers to an area of vulnerability. It has traditionally been used to refer to a weak spot in a figurative suit of armor. The standard meaning is similar to that of Achilles' heel. Grammarist provides a sample usage by The Daily Telegraph that they find acceptable: "Such hype was anathema for the modest professional fighter, who has 22 victories under his belt, and not a perceptible chink in his armour." The phra...

It is becoming more difficult to be sensitive to all peoples concerns when it comes down to being P.C., however the intent is always going to be a matter of disagreement. There is a difference between insult and not knowing that you are being insulting. We live in a very diverse world with many ways to make a point, choose words carefully and fewer people will take offense. A lake in my country was called Chink Lake, B.C. Canada with respect, and was accepted until recently it was changed. It was given that name when it was O.K. a century ago. Times will change, keeping up is a challenge…Be Well All…