Suggestion for a new Medal type

What about a medal for completing all missions in a Star System/Constellation?

Or just all the missions on a planet/whatever there is on that star system?

The appearance could just be a simple looking medal with a star.

Well then, you could also add a medal for fully exploring a constellation. The appearence could be a nebula, similar to Sophodot’s profile picture.
I would want to add another medal for exploring an entire star system but then there would be too many of them.

A medal for exploring all of the wormholes would be awesome as well. I’d want more attention given to the appearance of this medal due to it’s prestige.

BTW, I think completing all missions in a star system is the best choice because you’d probably have too many medals if you only needed to clear a planet, on the other hand needing to clear out an entire constellation would be too much.

This medal already exists. Adding a wormhole/constellation/star system exploration medal would be like adding more pieces to a jigsaw puzzle. 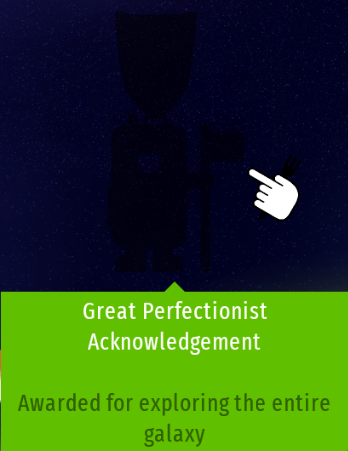 I want to add to Celestial’s idea.

The premise for getting each one is as follows:

The appearance is as follows: bronze / silver / gold star.

Eh, I’d put “Completionist” as the first. As for “Superior Overachiever”, I’d rename it to “Nothing better to do”