I guess you unawared that all weapons have been overhauled…sort of. Some got buffed soms got nerfed. So the price is equally 5k keys (upgrades included) is fair. But I agree with you.

Just give us the old prices back.

Its easy to get keys these days. Just take a high difficulty mission and slap in superstar hero and boom lots of keys. Think of it this way, 5000 keys for a maxed out poistron stream is a fair price to pay when comparing its stats with a maxed out corn shotgun.

to be honest the only weapons you should not buy are corn shotgun and absolver beam
others are either versatile, or effective in some specific types of missions.

By principle, the sum total of top-tier equipment on a ship must not exceed three times its cost.

Adding further to this, I’d like to highlight how an always-available galactic market and no proper tier progression makes it impossible to increase the objective worth of an object that is not increasing key cost. If this is the cost of essential equipment by tier 15, I shudder to think what late-game additions will look like.

Francis i myself am a game dev and i know how hard it is to change some values in a script, changing the prices isn’t hard coding, it literally takes less than a min if you have a powerful pc

Maybe buying weapons can be that much i mean each upgrade is higher than 300, it should be like starting from a 100 and so on…

ikr… i play on Super star hero and i barely get 100 for a 25 wave mission which has difficulty of 60-70% without superstar hero. Besides who have enough time to keep playing CIU 10 hours everyday so that you’ll get enough money to buy a new ship along with a new gun and max it out

Quote posts instead of mass replying.

Maybe buying weapons can be that much i mean each upgrade is higher than 300, it should be like starting from a 100 and so on…

Yeah, no, it isn’t as simple as throwing out random numbers and expecting one to work. That was what Francis was saying when he said “easier said than done”. Of course it’s a child’s work to chnage values in a script, though I presume iA’s way of doing it is a bit more complex given the server-client dynamics and regional pricing.

And how about when you have to pay 500 for a MORON RAILGUN? 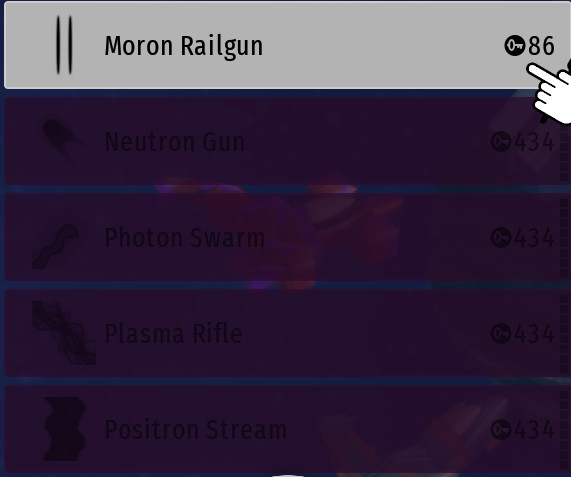 …I’m getting a feeling you haven’t played the game before making your grand arguments.

A mild exaggeration, but a fair point. It’s something I’m meaning to adress… which is coming soon, trust me.

Another point here to make is that the old prices were made with a hierarchy in mind i.e. a lot of weapons are better than others. So yeah, those exact prices are a hard no, since Vulcan Chaingun will then be wayyy too overpowered. Something to keep in mind for subsequent arguments.

New values will have to be decided, sure. But not the old ones. Those can’t work.

Francis i myself am a game dev

I really am quite curious as to what your exact field of expertise in gamedev is.

Srry about the moron one, it’d must be glitch that i was being shown 500 keys for it…btw what complex system of pricing are you talking about? I mean the buying system that i’ve learned and seen so far is that all the money is stored inside a float or an integer and if you want to change them, you can simply change the values like you want from the scirpt that you made for the whole store where you buy stuff and the price values from each weapon script, either something in a script is made private or public, dev still can access it cause they have the scripts. I don’t think there is a special Vector for prices of some stuff in game…

Btw i’m working on a shooting game these days, i sure will share with you guys once its done. It’d be good if u pray for me and my game cause i’m having some problems these days

I meant that it is only slightly more complex than that, due to the client-server architecture. I presume it’s stored server side (admittedly that would make changing them even easier), but that’s just speculation on my part.

Ma dude dev has access to those servers cause he’s the dev, those values are still stored in some float no matter if they are just in the game or servers. Servers get data from the game, if you change something in your game, you can just restart to refresh your servers so that they’ll show the chnages. ( Atleast it works for me )