Removing the limit on tiers

Before I start, I’d like to get something out of the way first. Don’t worry. this is not like Prestige Mode in CoD where you lose all your items when your tier is reset. And yes I know this has been suggested countless times, this is just my take on it. Now with this being said, enjoy this wall of text.

I’ll just say it up straight: I think the tier cap is unnecessary and should go. When someone first starts in the game, they would naturally want to work their way up to the top tier. Then what after that? They’ll continue to play and grind keys and bumping up their numbers… while THIS one just sits there collecting dust.

Why does this even have a limit? Perhaps when the game was relatively new and only a handful of people were playing it, it would’ve made sense since the need for further tiers wasn’t nearly necessary.

Furthermore, once your tier is high enough, you stop unlocking things and all missions are available to you (and this occurs before 99). I don’t want this to go to waste, so me and some other peeps on the Discord server discussed this and came up with this proposal of removing the limit to what tier you can attain. That way it can continue to see use and potentially further encourage players to continue by having them work their way back up to 99 again.

We could go with the simple way and just show the player’s tier as a plain number, but →TheLinnBoss™🏆#1🏆 came up with a much more elegant proposal by showing the tier in the form

X is the player’s current tier and
Y represents How many times the player has attained tier 99.

Example: When a player reaches tier 101, their tier will appear like this: 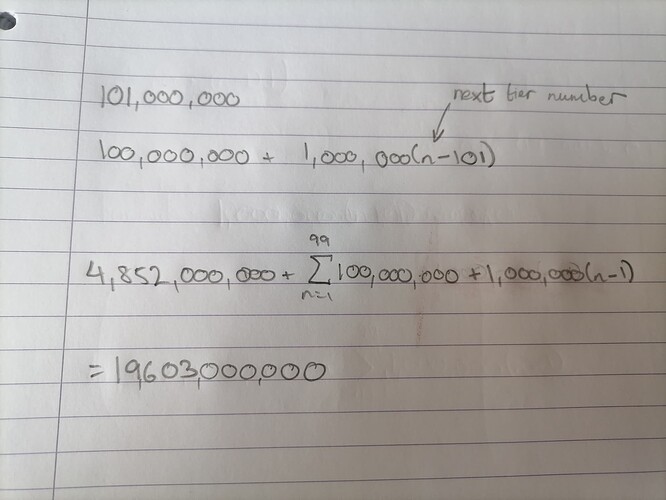 Here’s the maths if anyone wants to proof-read it. Please correct me if I made a mistake.

Well, besides bragging rights and key rewards, I would also propose a new medal awarded for re-reaching tier 99 (I’m no artist so I have no concept of what this would look like, and I’m bad at naming things).

This is all just to make the game a bit more interesting. It’s a way of encouraging players who’ve reached tier 99 to continue playing towards a never-ending goal while occasionally rewarding them for their efforts. The game isn’t even in its full release yet, and has built a solid player base, and already a sizeable number of players (nearly 1,200) have reached tier 99. It’s served its purpose in the early stages of the game and I think it is time for it to go.

But that’s just my opinion. What do you think? Should the limit on tiers be removed or not? Vote in the poll underneath and, if you’d like, say your piece on this proposal. Thank you for taking the time to check out this proposal (thanks also to the peeps on Discord who helped me consolidate it) and Peace!

I know, just elaborating some more.

why only tier 99? i want tier to be infinite after tier 99, tiers are really diffcult to reach.

I know, just elaborating some more.

You litteary stole my counting part

I… didn’t? The X+Y idea was suggested by Linn on Discord, I did not refer to anything in the forum at all when writing this up.