Another 10 wave ideas. No surprise. Sorry about the delay, I’ll work on that.

A barrier plank that swings up and down like a seesaw. Chickens will love it! They’re stacked, therefore taking them down will cause them to collapse, no gaps. Have fun and be safe! 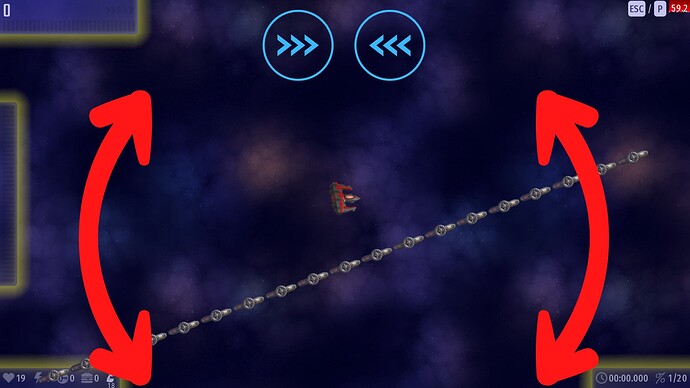 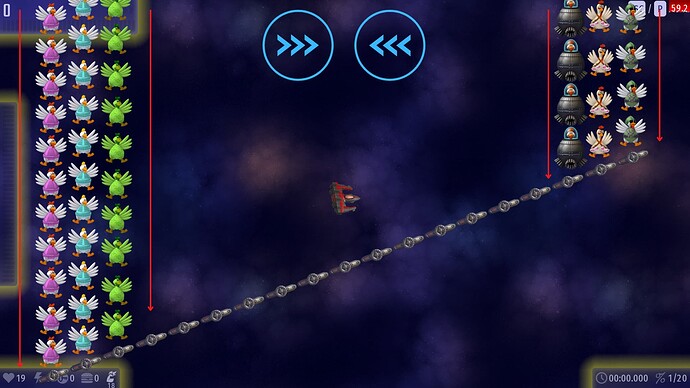 Again, I was inspired by ‘‘Effervescence’’, so… I made a Droid version of it. The core of this wave acts like a magnet and attracts bubbly Droids, stacking them up while stuck to the magnet. Once all the bubbly Droids are taken down, the magnet barriers shall open. There’s still some bread to win by taking down the magnet, making it worthwhile!

Note that the bubbles work just like in ‘‘Effervescence’’, as a way to make this Droid wave a better challenge. If it’s added, I’m wondering if IA would keep or remove the bubbles? Only time will tell… 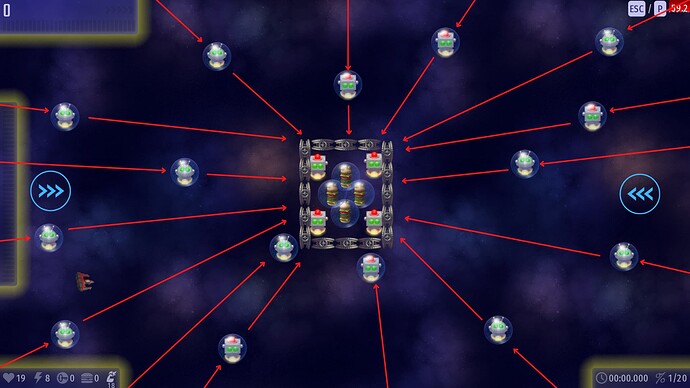 Fed up with the Henpire Ambushes? Well, you should try this for size! Basically a combination of ‘‘Visitors From Another Dimension’’ and ‘‘Tuning Fork’’, this wave involves several interdimensional portals appearing from all sides, each portal spawning six eggs that ricochet on the sides. Looks simple and complex at the same time. Talking about a balanced breakfast, right? 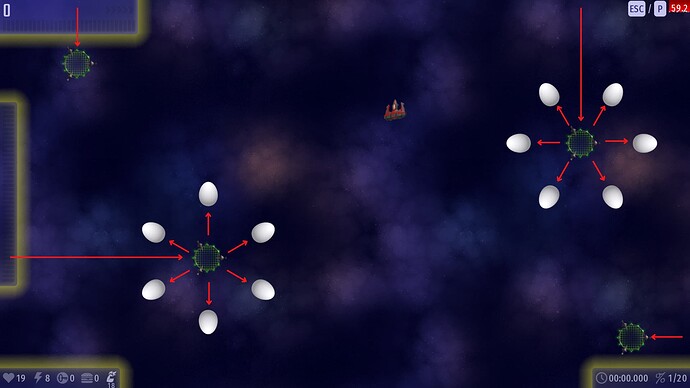 How about we take ‘‘Asteroid Vortex’’ and replace all its asteroids with Chickens and add a black hole on the center? Oh, and if you don’t kill all of them, some will escape going through the black hole. Kinda like ‘‘Oops, Wrong Exit!’’.

All jokes aside, let’s not replace ‘‘Asteroid Vortex’’ with ‘‘Chicken Vortex’’. These two waves are separate. 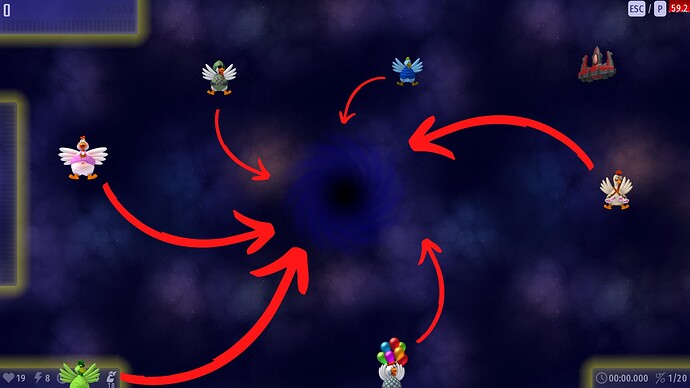 Surrouded by Chicken caterpillars? No problem! For every bubbly caterpillar, keep killing the enemy that is vulnerable until you finish off the head (shown by Chickenauts in the picture below). Pretty much like a chain reaction! 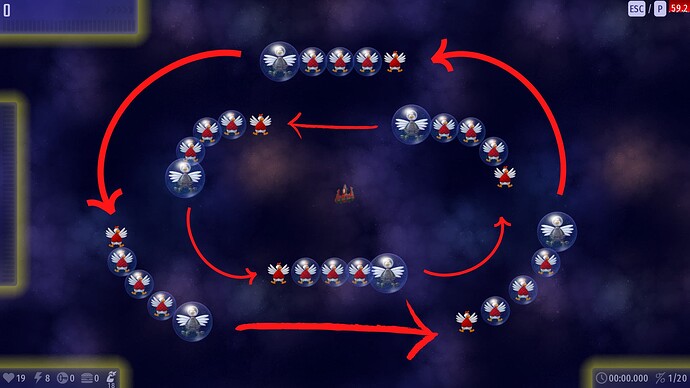 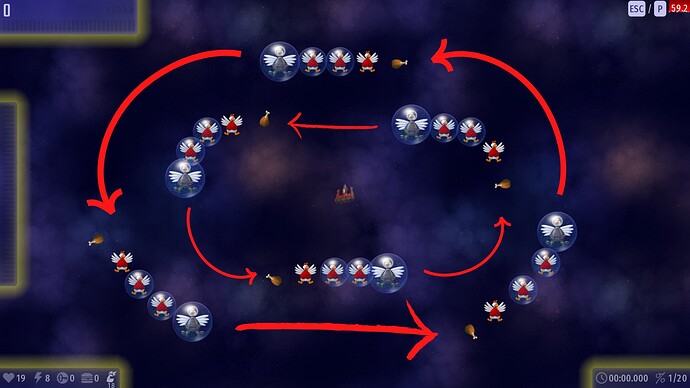 ‘‘Stacker’’, but this is a Comet version of it. The major difference between this wave idea and the ‘‘Comet Chase’’ wave is as follows: ‘‘Comet Chase’’ is perfectly ramdomized while ‘‘Comet Stacker’’ always has Comets dashing on the left/right corners, and the Comets inside are randomized too, but based on the enemy pattern of ‘‘Stacker’’.

Comets won’t stack, by the way, it’s just a name. Maybe ‘‘Comet Highway’’ would be a better name? 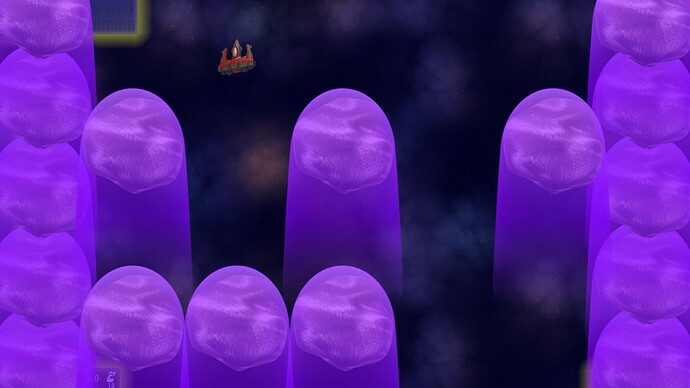 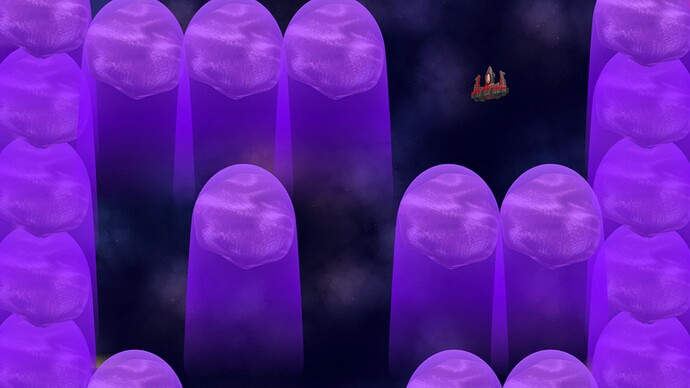 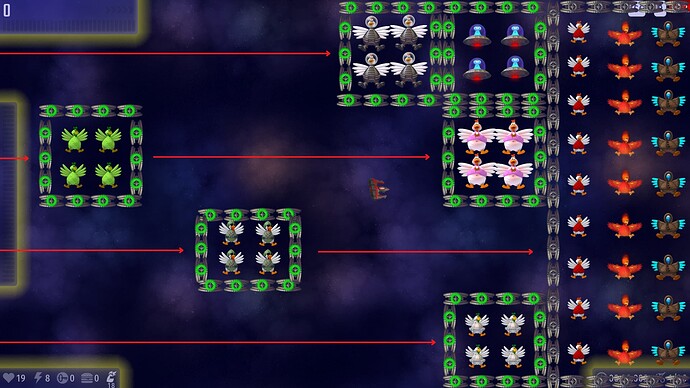 Based on ‘‘Yin and Yang’’ (or is it ‘‘Yan and Ying’’?), this star permanently spins in one direction. Destroy the barrier bombs to take down the chick turrets, and once those have been dealt with, the rest of the star will unlock. As for the rest, you know what to do…

I’m sorry about the star being a bit twisted, but this is the best I could do without being too much of a perfectionist. 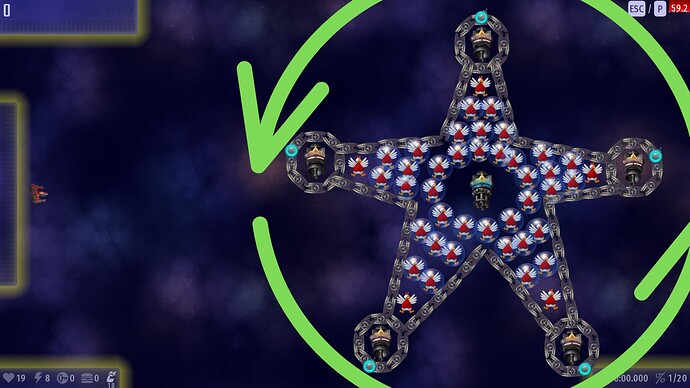 Each line of orbiting Festers you demolish unlocks its barrier wall until you reach the two last Festers that hold the shooting barriers. You can dodge, right? 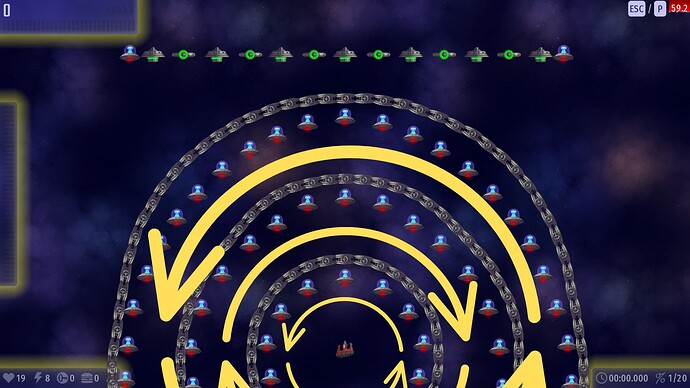 Can’t sleep well because of your uncomfortable pillow? Let’s check what’s inside it. Wait, I know what’s messing up the pillow! Chickens inside it, of course! All you have to do is blow feathers away to reveal the enemies and exterminate them. However, since your sleep was ruined, fatigue is making you rotate all the time. 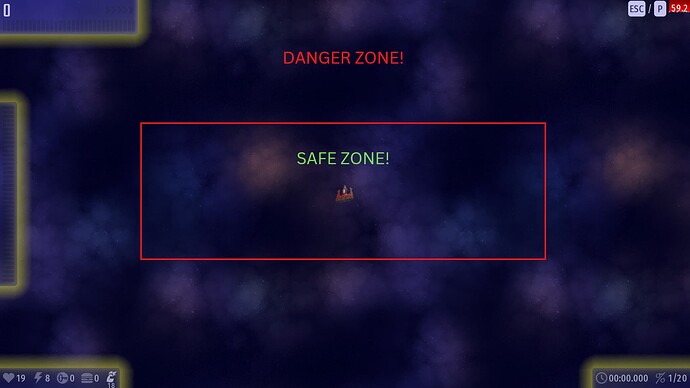 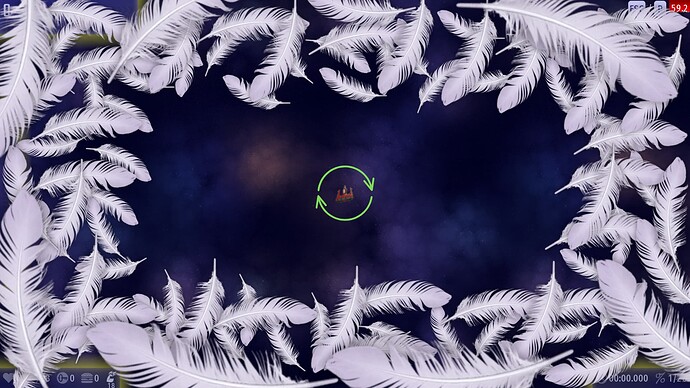 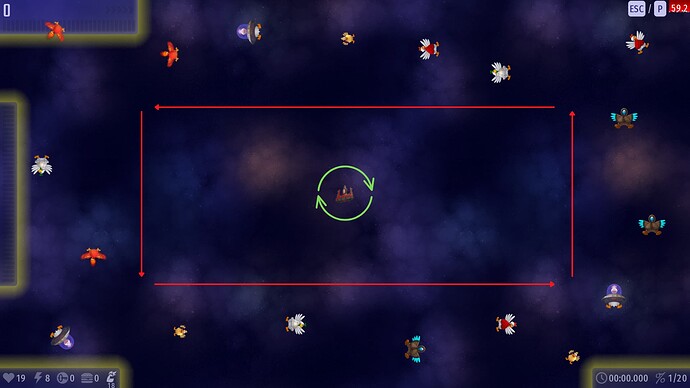 May the Stars always shine beside you!

The last wave looks like the wave “Feather Clumps”, ngl.
Anyway, these are all good wave ideas!

I like all of them. The magnet is a bit too much, so instead of 9 enemies per container, just 4-

The last wave looks like the wave “Feather Clumps”, ngl.

The magnet is a bit too much, so instead of 9 enemies per container, just 4-

I’ve made a few adjustments.