So, there’s no way I’m the first one to suggest this, but…

Is there a way to make Chat bubbles match the GUI colour of the respective players UI, rather than the client’s own? I’d suspect not. But it’d be much cooler.

It only surpport for windows 8+
My pc is windows 7

so I can’t use

When the game says that my router is limiting my NAT, does that just mean which other routers can join the game? Or does that mean my connection is slow?

It restricts which people can join your game. See the main topic for more info on that. It does nothing to your internet speed

Well my darling! Get dsn

I find it interesting

In every router has config software chip, like BIOS. You can view at instructions and type correct URL IP: ex. 192.168.8.2. Log in and access to settings. in Security Tab you can access NAT Settings and switch to Cone NAT. Otherwise, you can enable VPN but with caution.

Okay, so this might be kinda controversial, but I think the current profitability of multiplayer missions is too low. I’ll set up a poll to see what others think about this.

And sure you could not mount anything but that would make multiplayer missions boring if you are financially discouraged to bring stuff since the profit margin would be too small.

Is the profit margin for multiplayer too low?

There’s also the fact that most players have low bandwidth and unreliable networks so low ping doesn’t really guarantee a smooth multiplayer experience. So I suggest making players intangible to everything, including projectiles, food, coins, powerups, etc if their ping is greater than 1000ms and is likely in danger of disconnecting.

So whaddya think everyone?

This is where you will post the clip you got after the 3rd anniversary Without any further ado, LET’S ROCK!!! [Chicken Invaders Universe | E.A.| Most Cursed Multiplayer #1] 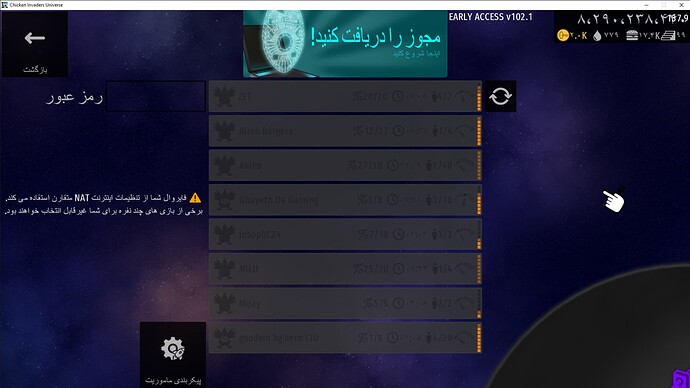 Can you tell me what NAT you got?

he got symmetric NAT i assume

have you tried the solution i gave in discord?

how do you change the numbers language

Go to the main menu of the game, then click on the language and wait for the languages ​​to be downloaded. Then a menu comes to me. Choose your preferred language.