This idea feels like the natural extension of the widely suggested idea of adding custom quips.

Was going to bring this up too. I like this suggestion, but I’d rather have custom quips than mission messages, personally.

Since those times, I did realize the drawback of custom texts and why iA may not want to add them into the game, there’s gonna be users who make inappropriate or offensive stuff and censoring them is gonna be really difficult unless iA changes their policy on online play, thus allowing such offensive content.

I don’t think the policy will change given a significant portion of the game’s audience will be children.

tl;dr: I don’t think that there’s a strong argument against custom text entry (especially for client-only display) given the precedents that have already been set.

how about instead of a custom death message, there be a subtext under ‘‘Mission Failed!’’ telling you how you died, cus half the time i can’t see what killed me:

This is also a great idea. Could be entertaining in multiplayer, too. Probably not the easiest thing to code, though.

Did you just rickrolled me

Lose
Why are we here just to suffer every night

Since entering the space store, I have not seen any chat entries and death notices😥

Nope, you wouldn’t to getting the message themes that cuz the idea it would be ready until the developer of the game’s himself it would looking forward on it to becoming as an newest feature to an newest version of the game if aware.

Mission Failed!
“You seriously tought you had a small hitbox to get the firepower through those projectiles. Nice.” 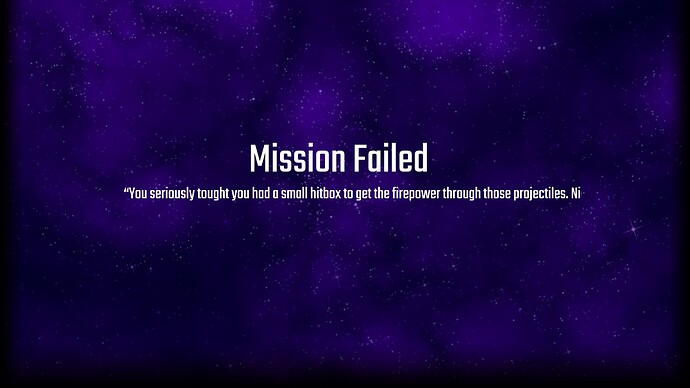 I suggested a while back changing MISSION FAILED to MISSION FOWELED. I didn’t get a response. Tell me what you think. Be well all…

Didn’t you get a response?