I need someone to do the concept art for my idea! Due to the school and the lack of time I can’t do that stuff. For more info, please contact me at Chicken Invaders Discord Server (I’m TaxiBotolov856)

Every Chicken Invaders fan knows what UCO stands for, what is it and how dangerous it is…
It would be fun to see the mini-boss version of that bastard.

The idea is inspired by the CI3 Flash version’s boss (which is unfortunately an reskin of Crazy Squawker/Big Chicken). However, the way this enemy works is different.

Take this picture for design reference: 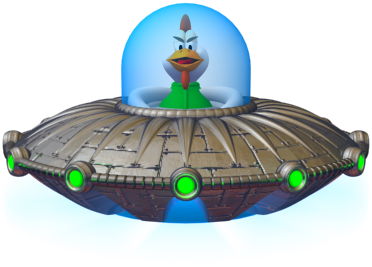 First, as the idea name implies, it is the prototype of UCO’s spaceship which is larger than Chickenaut, but smaller than finalized UCOs and lacks “tentacle weapons”. The size of that spaceship makes for containing several chickens at once, but only one - the pilot - is visible.

That miniboss has exclusive restrictions regarding of its power:

Be careful though, as it can shoot laser (Alien UFO style) directed to the place the player’s spaceship was for 3 seconds. (The pilot’s eyes are tracking the player’s location for an accurate shot ). After shooting the laser, the prototype must wait 5 seconds for reload, then homing the player’s coordinates and so on.

Upon destruction, up to 5 random chickens (starting from chick breeds through chicken breeds to special breeds [Chickenauts, Slob Chickens and UFO Chicks/Chickens not included]) are deployed and starting to fly everywhere (it’s like breaking an Egg). The player is rewarded with coins and lots of points (if defeated with glowing aura 3 keys will drop)

What do you think? Is it good or bad idea? Let me know in the comments down below.

Update #2:
Some tweaks and fixes:

Tweaks to the newcomers:

Yes, it is good really

Well that was necessary!

I don’t know, we got Gatling Guns to deal with as mini bosses in-waves. I thnik we don’t need another ones. In bullethell waves it’ll be impossible to beat.

Now you made it better! Good job.

Update #2:
Some tweaks and fixes:

Tweaks to the newcomers:

Are you planning to do more updates for this?

@minasam123 Maybe… Are you annoyed by these constant updates or assuming that I’m beating the dead horse or none of these both?

No i’m not annoyed by them

Maybe I need some concept art for the UCO-P. This way I can show the actual look for my idea

I don’t know if I can do that on my own though. I have more important things to do becuase I’m in high school