Now that we are at version 10.1,How would you rate the current build from a scale from 1 to 10.

For me,i would rate 8 for the current build because it is the combination of previous games essentially making it the ultimate chicken invaders.(Although there’s no CI1 and CI2 stuff yet.) We also have awesome new modes like boss rush and daily/weekly challanges that change the pacing of the game. Harder remastered bosses are great for hardcore players and fans of the series. The customization of the game is really fun and rewarding. But there’s not much new chickens,bosses,wave in the game yet making it a bit repetitive so i am hoping to see them in the future updates and getting notifaction every time you visit something is a bit annoying for me.

Okay so everyone keeps saying ci1/2 content will be added. There is no bosses to add from first two games, only couple of waves which are all “meh”. 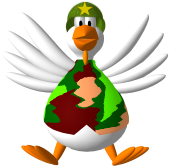 IA will not add any CI1 content. There is litteraly no things to add from there.

i think they’ll only add ci1 waves and that’s it.

I sould scale the game with this build 6/10. There should be other waves that isnt avaible at update 10, multiplayer and squadrons, leaderboards. Otherwise game is 10/10 if all of these gets added

sarge chicken is military chicken yes, and only the ci5 version is added, but that won’t stop ia from adding it’s ci2 version as a boss, haha

It would be useless, it’s weak and bad copy of special forces in CI5, I read somewhere that it’s actually the same boss.

it is the same boss yes, and you said that it was a “bad copy” of the CI5 version? did you know like, there can be multiple military chickens at once? (as seen in CI2), because the CI2 version’s is alot different from the CI5 version (aka the special forces) and you never know if IA’ll buff the ci2 version since you said it’s “weak”

All I know is that CI5 special forces is supposed to be remastered CI2 military chicken. If they add it, they would need new name and different military sprite from already existing CI5 boss with new attacks which I don’t what could be. I think it’s very unlikely that we’ll see it happen.

if CI5 military was just a remastered CI2 military, then it would have the original clothes, original size, original attacks (the three neutrons) and that’s what i am saying, the CI2 version of the military chicken, but i agree that they’ll need to make a new name for 'em

I’d say there’s potential. The main issue I have is that if the CI2 Military Chicken is added, it might end up being a bit too similar to Show 'em who’s boss (multiple big chickens at once and that kind of thing).

Yeah, at this stage it’d be way too easy, so some sort of a buff to the attack pattern would have to be made.

Yeah original clothes and look would definitely fit the new engine and style. Even if it was added it would be way too similar to Show 'em who’s boss like @GgWw1175 said, same with CI2 mother hen ship… it’s the same as Blast from the past.

But it would be boring if they introduced another military chicken with that one attack… they’d need to rework it to have better sprite and new attacks. It’d be like special forces brother.

To be honest, I’d prefer to either have all 3 old ones or a completely new one.
If the CI2 and CI3 Mother-Hen Ships are combined into one, then the one from CI4 should be thrown into the mix as well, since it is technically the same boss.