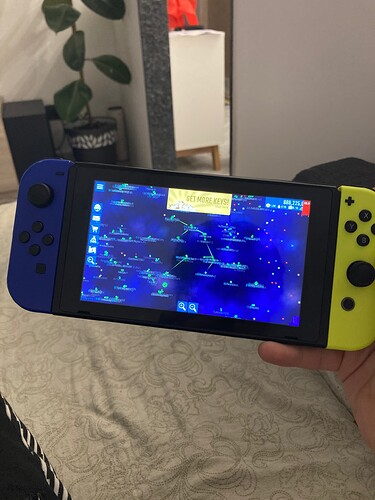 it’s the android version and i’m running lineage on my console, touchscreen seems working fine, i should try mapping the joycons for shooting and moving around the menus, or maybe InterAction could add controller support on android

UPDATE: the joycons actually works, i can move the ship with the left one but i still need to fire with the onscreen button, but i think its a simple fix to just map a button to emulate a press on the fire button

Wut is that real and true?

Man, are you sure you are not Linus Tech Tip?

sure can play mutiplayer

don’t know if you have noticed what i have written in the post, but it’s actually android running on the switch and i’m playing the android version of the game

was just that frame that lagged😅 the game runs fine limited at 30fps, don’t have tried 60 or Unlimited fps because of limited battery life

i’ve played a game online with someone and worked! the guy paused midgame for so long that i got bored and i quit, but still i played

Are you… what???
If I’m not wrong, Pentium 3 Base speed is only 700MHz. How???
Upgrade without formatting is not available, but install it using usb boot is available

Think we’re off topic from now

nah bro i overclocked it.

I’d love to know why they don’t port the series onto Consoles. All they really need is Xbox/Playstation/Switch controls and that’s pretty much it.

You up ROM lineage os on Nintendo switch?