Greetings.
This place is for talking about daring and dare difficulty or type of mission of LEAGUE in CIU

@MNaeemi777 which rank are you?
i wanna dare you

It’s not for the gamplay that is litteraly the same we are used to (It’s nice to have full control on what mission we are going to be playing) but because right now it will be really whale-friendly.

I get that skill beats money in this game (And I don’t have neither) but one may be unable to actually afford to be 1st in league without tons of extra lives and appetite attractors.

It’s the problem this type of asyncronus gameplay have. The same challenges suffer from day 1.
I agree with lives and attractors being in challenges since they can only be played once (and are longer than 10 wave dares so tactical inventory management can count as an important skill that is shown there) but in League it’s totally unfair for light spenders\f2p.

Also why boss rush are a thing here? Time apparently doesn’t count so it’s actually possible to draw a lot.

is league good in CIU ?

but gladly there is no medals for first place 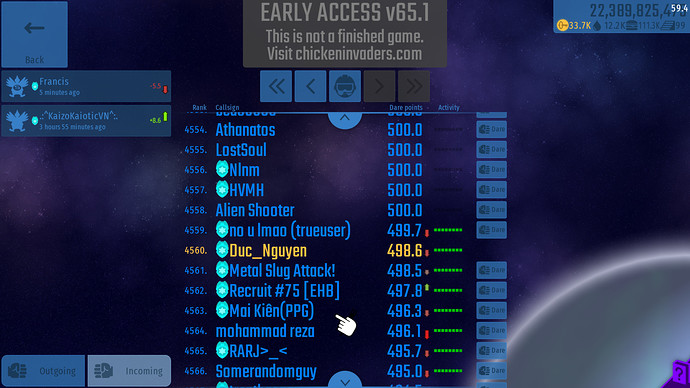 Sorry, winning is a force of habit for me

Beside, if you have a slot on one of your squadron, add me in please.
Every one can add me in the squadron too

@Stardrone Did you surrender by accident?

Game takes place in future. Also someone is going to send you a “toilet” message.

This is test-game, I’m not eager to become the leader - I’m much more interested in shooting chickens than competing with glasses

But congratulations on your victory!

To be honest, it was also my first attempt in this mode and I was putting off testing the league completely, but there was an opportunity