CIU has a long way to go

CIU still has game mechanic faults (and i’m not talking about the UI or stuff, i’m talking about the bosses, especially from older CI games).
The Giant Robotic Space Crab can trap you with its claws while throwing chicks or chickens (of course, killing you).
I suggest you keep zombie chickens and ninja chicks out of the Yolk Star.
Do not make Henley’s Comet come down while there are comets flying by, especially the lined comets, because it can come down to the hole and block it, and of course, you die.
You should make a way so that the UCO is easier to hit.
Some way to know when the Mysterious Ship shoots.
The Iron Chef sometimes swoops down all the way to the bottom of the screen.

P.S.: There is lack of information, too. We don’t know how Final Keys are earned, and i would suggest a UI extension to show how many coins/keys you have collected. (And coin keys and coins are two different things…)

The Giant Robotic Space Crab can trap you with its claws while throwing chicks or chickens (of course, killing you)

What? Never had this happen.

You should make a way so that the UCI is easier to hit.

Some way to know when the Mysterious Ship shoots.

There is. Whenever it stops moving,it’s probably about to shoot.
Also,it will keep shooting with same intervals. It’s really not hard to tell.

Yes, i meant UCO. I got trapped a lot of times. And not everyone can notice what the Mysterious Ship does before it shoots, they should add a green glow around it or something to tell. Most bosses are just taken from the original game and just thrown in CIU without another look at it.

You know, I used to ask the same questions as you did but eventually I learned that rather ruining the game for many by making it too easy, I would instead practice fighting the bosses and finishing the waves. Its okay to die a whole bunch of times, as long as you gain experience in defeating the bosses and enemies. Try to work your way up in difficulty slowly instead of straight up going at them at SSH or something difficult like that. I’m not a pro but even I can figure out that you can fix most of these problems by getting good.

Though I do agree with what you say in some ways the whole point of the bosses is to learn their attack patterns so that death isn’t a problem. It may be hard, I’ve been fighting these bosses on SSH for 5 years now and I still can’t get the uco down. But as the saying goes “Practice Makes Perfect”

Bosses are fine,really,but I guess it looks like that to us because we’ve been playing against them for years.I guess that’s what a beginner completely new to CI would be experiencing.

There is no way to avoid Henley’s Comet’s fault on high difficulty, and there is little to no way to avoid the Giant Robotic Space Crab’s, and if you’re using a Heavy Bomber ship, you can barely avoid the Iron Chef if it swoops down too low. Please think about what you’re saying… Also, i’ve been playing CI for 6 years, do not assume.

Well, with bomber its posible if you by some jets.

Can you record just how you got trapped by the space crab? I know it sounds insane,but…I can’t even imagine it no matter how hard I try. I seriously don’t remember the last time I died to a space crab.
If you played for over 6 years already,a space crab should be easy to you…

Here’s some tips for you:

You can buy Barbequers in the store and equip them onto your ship to destroy the smaller comets so that you can get out of the big comet’s way. The Barbequers can also clear off the chickens or the mini sun’s (depending on the Crab version) thrown by the Giant Robotic Space Crab. Although I agree that the bomber is too slow and the maneuvering jets are too expensive (please don’t remove the speed limit altogether, I’m simply asking IA to make it less harsh, I can’t come up with the exact percentage for the increase in speed), I do suggest completing regular mission with the HC or Muller series of spaceships first and see if there are any waves or bosses that require the speed of the mentioned spaceships, if there are none such waves or waves where you feel comfortable using the bomber instead in the whole mission, well use the bomber in such waves. Also with your 6 years worth of experience playing the CI games, did you start with Chicken Invaders 4? If so, that explains why you’re having so much difficulty playing CIU as the latter game is far more difficult when compared to the former game when using equivalent difficulty levels eg: SSH (Superstar Hero) in CIU is more difficult than SSH in CI4, so if you still have difficulty playing CIU with my tips, I simply suggest you to lower your difficulty and slowly work your way back up in difficulty slowly. If you need more tips, feel free to ask for them.

I found out that the Giant Robotic Space Crab’s fault is unique to CIU, and doesn’t appear in CI 4. I can’t record it for you, you need to see for yourself, and keep in mind that it needs to throw chickens and not shoot lasers.

Can you describe what the Space Crab looked like? How many arms did it have? Was it light gray or black? If you forgot, then you can go to the wiki. 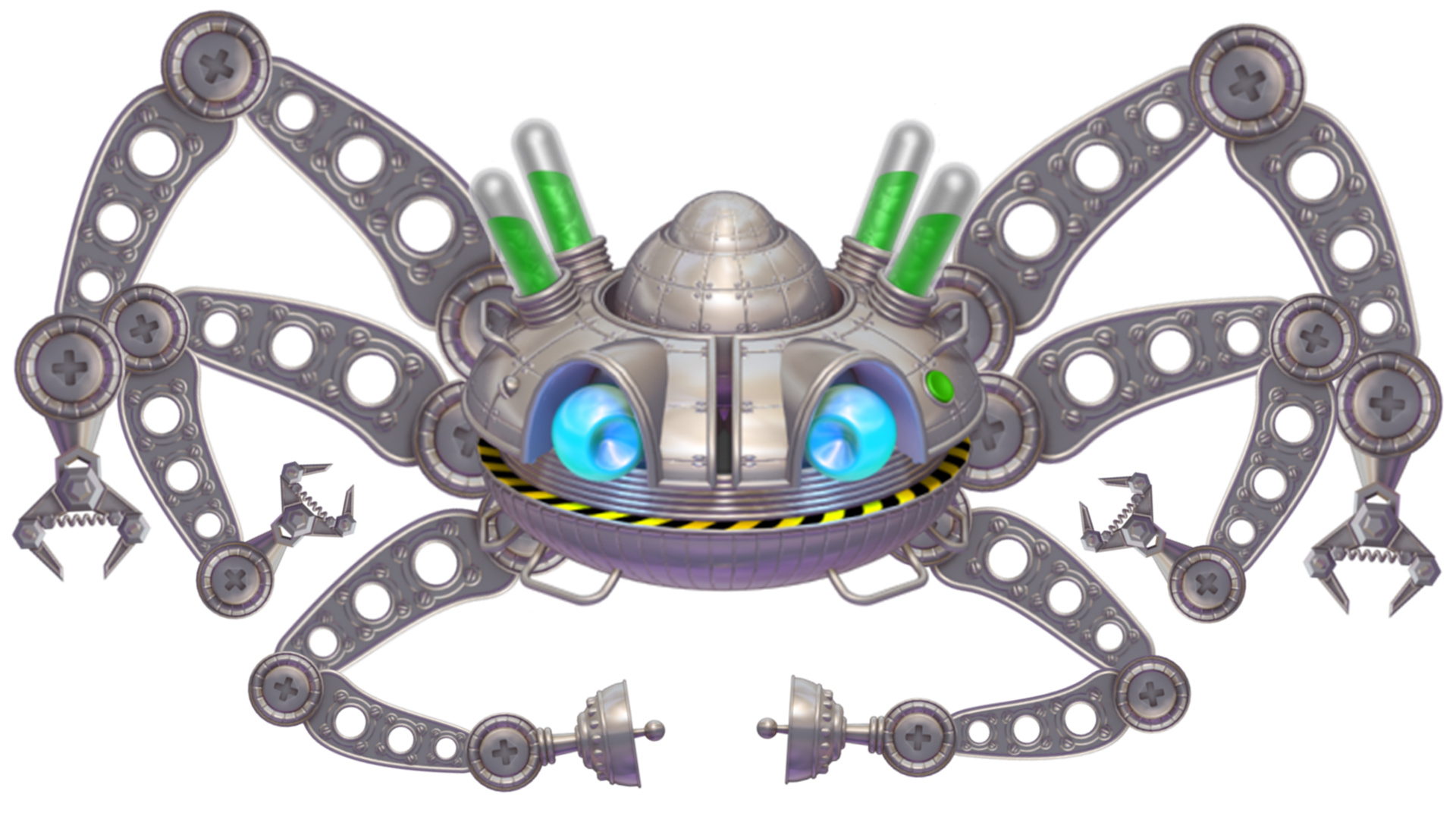 Giant Robotic Space Crab is a boss that makes frequent appearances since Ultimate Omelette. It has been first encountered in the Foreign Galaxy and has since made it to the Milky Way, presumably by following the Hero. It is known to have also...

and keep in mind that it needs to throw chickens and not shoot lasers.

So it can’t be the the black one. And neither can it be the second one.
It is the first one for sure.
The third one also uses lasers,so…

Isn’t it weird how the first crab is the hardest one compared to the other crabs?

That’s due to the smaller screen.
Explains why the Yolk-Star is extremely hard