If you feel familiar with this boss, the you’re right. I just remodeled this from heavy weapon deluxe. With improvement of course. 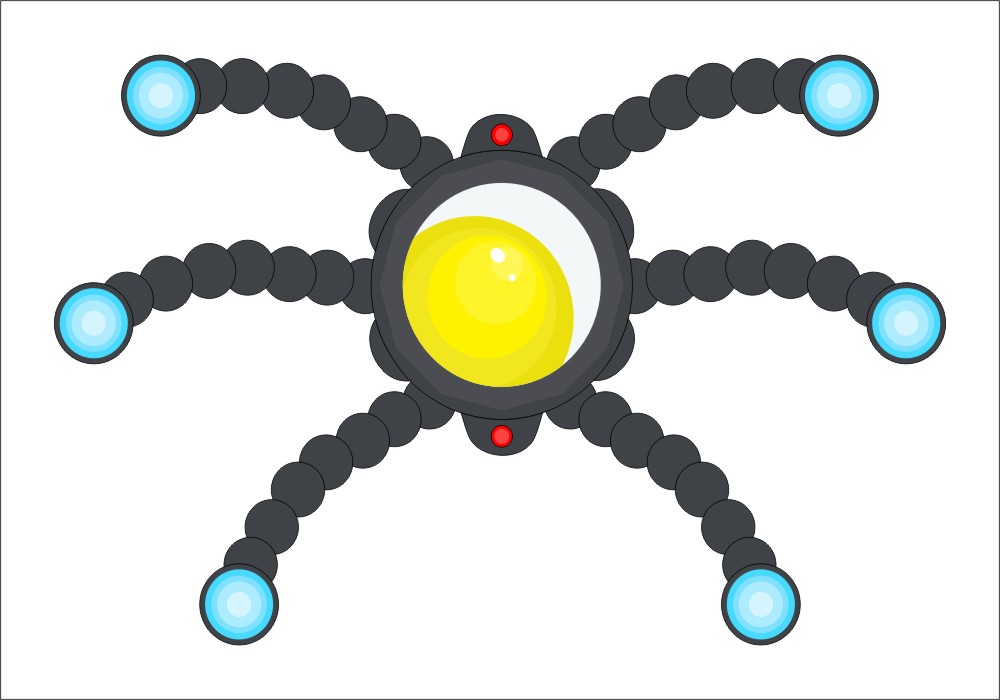 The first version has 6 arms that have ability to shoot lightning bolt directly under it. When it starts to glow, it means it will shoots soon after. This version is the most similar to the original in heavy weapon.

It has two patterns, first it charges all its arms simultaneously, don’t under it! And second, it will flies left-right-left-right and shoots with each arm once, and then back to pattern one. 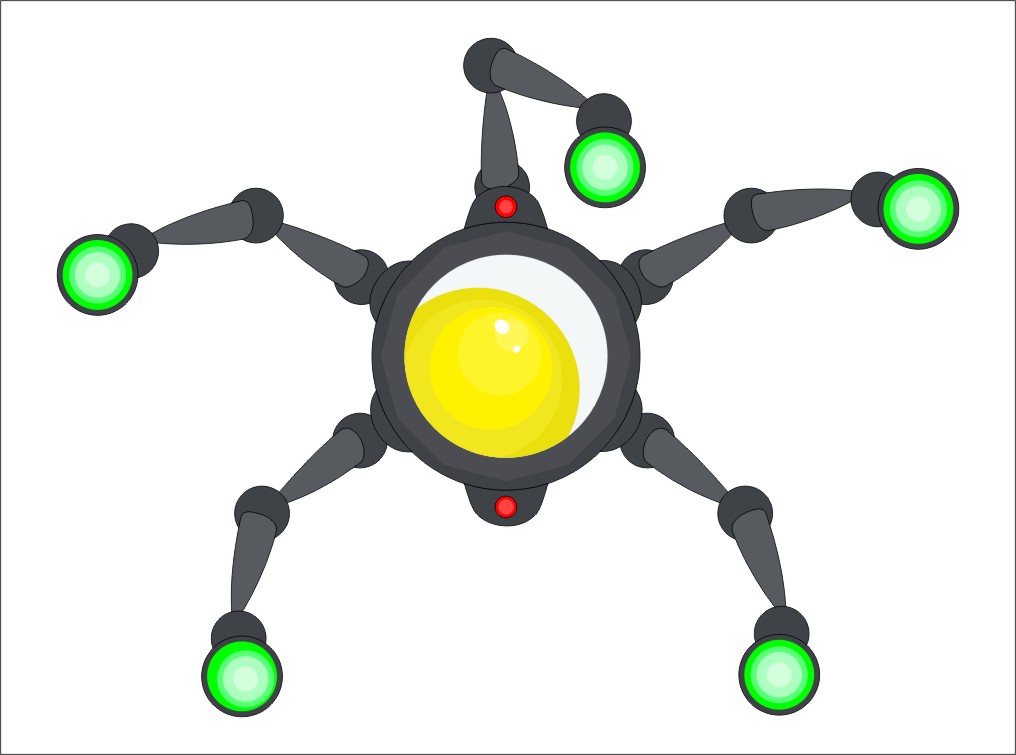 This version has simpler attack. It shoots green long beam (like UCO’s) from each arm once to your position. Be careful to not ruin the pattern, or you’re trapped. 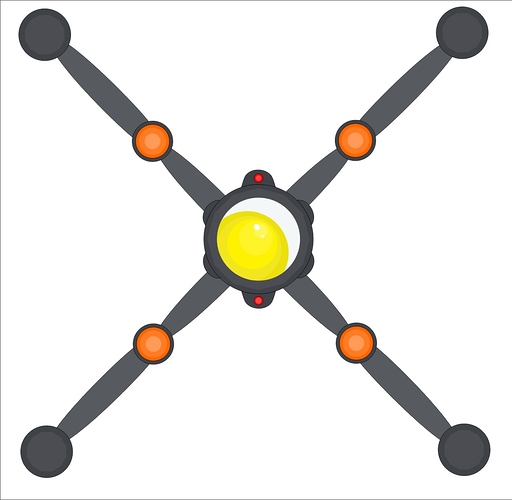 This one is wider than the others. The core won’t run away too far from the center, and its arms divide the screen into 4 regions. Its arms will be rotating and sometimes it rotate it back to opposite direction. The orange parts will shoot sunballs if the difficulty hard enough. 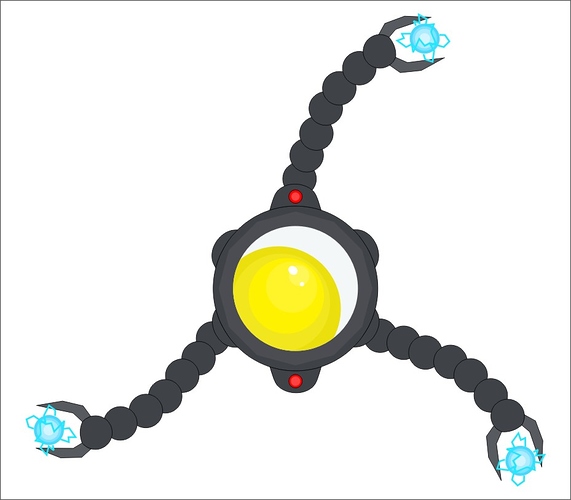 This time it backs again and throwing 3 electric balls at you simultaneously! These 3 will link to each other creating triangle shape. Each ball moves at different speed, so the shape may shift. 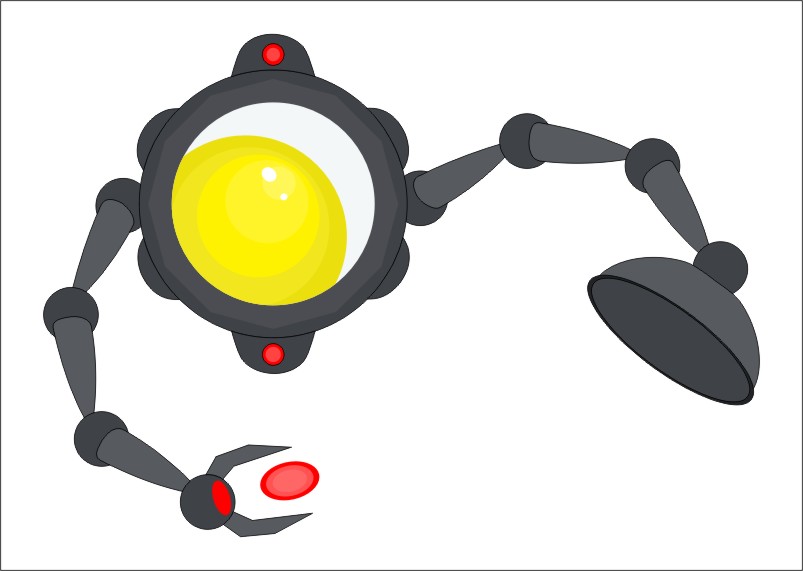 It has unique ability, the bowl-like shaped arm is a magnet and will pull you closer while the other arm shoots red laser at you. After that, it will rotate the arms so both will swap their position.

You know how a wrecking ball works? Also the purple wrecking ball will shoot purple neutrons randomly like a chickenaut does. Don’t worry, you won’t die by touching its cable.

Paxman has some poimts. While it would be difficult to implement, 6 version for a boss is too much in my opinion. Regular 4 is fine.

It can’t be implemented with current design of arms, but it could work with some redesigning.

Mobile autocorrector.
The meaning is the same

If it comes to only 3 or 4 that will make into the game, which version do you want to?

Well, it’s only a rough design of the boss. Detail and any technical improvement should be done. What’s make you think it’s weird? And how it supposed to be in your opinion?

Awesome boss but six arms is too much.
It would be better boss if it had only four arms

Then I feel like we would get a copy of Crab B.

all right we keep 6 arms then

Why do you ignore the 5 arm yolk?

Seems like the 6, 3 and 1 arm/s variants won the poll! Do you like the attack pattern? Or it could be improved?

More detail on the attack patterns

…wonder if they ever be implemented! 9Apps VidMate app

Greetings smithclarkson,
If you ever find an old post but still want to share your love, you can click the heart in the bottom right corner to like it.
We do this to avoid bumping old topics.