It seems the chickens are allowing berserkers to use the Gatling guns now.

They act similarly to chick Gatling guns, but are much more aggressive.

And yes, destroying the Gatling gun will make them angry. So watch out.

He’s talking about this: 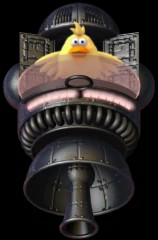 I was talking about the red ones.

you didn’t get it did you

I know about the chicks riding Gatling guns…I just figured the berserkers could drive them too.

Then what’s the difference between them? That it ejects berserk? I see No points in this

The berserker one fires more eggs, or fires bigger lasers.

You haven’t heard of the red rooster enemies?

There’s no “rooster” enemies, yet.

Have you not encountered the berserker wave?

Have you not encountered the berserker wave?

They are not red roosters, they are berserk chicks.

That’s what I meant.