I assume it’s going to be harder with bomber, like when you have only one enemy, it would die to the first beam but the second one would go through it

Can you list me the missions bounces and how to get them? Because I don’t know much about them?

Sure, lemme list the most optimal and detailed strategy for each 170 different wave types (not including variations).
In general, just use plasma, go for pecking orders and multikill the entire wave. Go unprepared for easy daily and sometimes intermediate too, free 55k base is nice. Pick up the food and coins and don’t rush with killing everything, go slowly so they don’t drop everything at once because you can’t pick up just everything then.

I only get pecking orders in The Replacements wave and multikill is for killing 40 or more enemies, but to get the pecking order you must kill enemies as fast as possible, so how to get it while I should not rush?

Correct me if I’m wrong?

Also how to get Early Bird bounce and are there more?

Speed is irrelevant for this bonus, you just need to kill the enemies in the order they spawned. I can’t tell you the pattern for every single wave so go figure. Sometimes the timing is tight, so a part of the skill ceiling is deciding whether going for pecking order is more worth than going for the food and the multikill.

multikill is for killing 40 or more enemies

It’s 4 or more to trigger the bonus. 40 is the requirement for the medal.

Also how to get Early Bird bounce and are there more?

Kill an enemy in less than 1 second after the wave starts. Sometimes not possible depending on how the enemies spawn in a wave (for example, Magic Flute takes more than 1 second to spawn killable enemies so it’s impossible to get Early Bird bonus on this wave).

OK, so are there any bounces? And @EmeraldBirb is it a bug that adding special weapons adds 30 seconds.

It’s not a bug, It’s happening because you are trying to finish the game real quick, that’s why it adds 30s to the time.

I mean, for example, let’s say you have missiles, you spammed a lot of them, right? well, it makes you pass the race real quick, so that you can finish it in 9 minutes or whatever time, that’s why spamming special weapons adds time to your total so that you don’t finish it too fast and show up as the first on the top-10.

If you read the Space Race Description, you’d know that there’s a warning. The warning says that a nearby blast could damage the artifact, and so Special Weapons are discouraged.

That’s why you get a 30 second penalty.

Don’t ask why. That’s just how it works.

Wasn’t it a 15 seconds penalty?

Edit: nevermind, the 15 seconds penalty was used before V50 to punish end sessions after beating a boss in space races

Why don’t you try it

Just use them on the first wave and cancel mission

Are there more penalties?

Just to be sure

A lot of these questions can be easily answered by simply trying them yourself.
Basically: Just play around, pay some attention to details.

Damage Amplifier is the only special weapon that only adds 10 seconds as penalty.

Sometimes the timing is tight, so a part of the skill ceiling is deciding whether going for pecking order is more worth than going for the food and the multikill.

This. And it’s not always easy or intuitive, either.

I struggle on waves where it’s not inherently obvious what the pecking order is, but still clearly have one. I feel like a miss tons of points on those.

Damage Amplifier is the only special weapon that only adds 10 seconds as penalty. 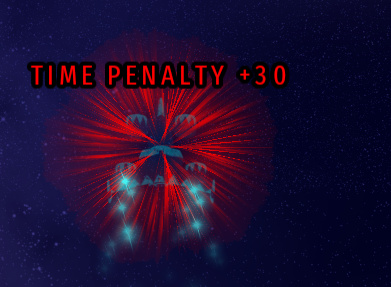